“I Believe That You Already Have The Answers to Unlock Your Potential.”

Dr. Torres martial arts training history dates back to when he was a teenager living in Miami, FL training in an American Taekwondo 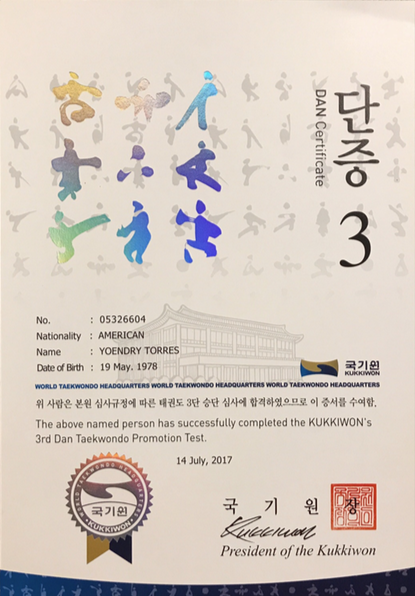 Association (ATA) school where he earn his deputy black belt under Grandmaster Andy Silva. Dr. Torres later trained for a couple of years in Shaolin Kung Fu before having to pause his martial arts training while attending college. Dr. Torres later returned to Taekwondo during his last year (2008-2009) of graduate school in clinical psychology while living in Chicago, IL where he began to consider the idea of merging his interest for martial arts and psychology. Dr. Torres trained under Grandmaster Rodriguez in Chicago, IL until his 3rd Dan before moving to Tucson, AZ in 2013. Upon moving to Tucson, Dr. Torres began training with Grandmaster Jae Kim and earned his 4th Dan before Grandmaster Kim retired. Dr. Torres, currently holds a 4th dan, and is continuing his Taekwondo training with Grandmaster Dong Hoon Kim at Tucson Tae Kwon Do Chung Do Kwan. Dr. Torres also holds his 3rd Dan through Kikkiwon, World Taekwondo Headquarters and competes in USAT sport Poomsae.